Ok, so we’re on our last day in Israel.  It’s going to be action packed and begins at 5:30am and never ends……no, seriously…..it never ended.  We had a lot of ground to cover and then we had to get back to the hotel, pack and leave for the airport, where our flight left at 11:55pm.  Yes.  11:55 PM!  This was going to be a loooooong, rainy and cold day for us, for sure.  BUT…..when you put on your armor in the morning (Ephesians 6:10-18)you can be prepared for anything!!

So let’s all go to the Garden.  Yes, the Garden of Gethsamane.   Known to have some of the oldest olive trees in the Holy Land!  The trees that are present now are actually the saplings of the original olive trees from the time of Jesus.

Nice to go there and meditate, and imagine that you are at the same tree that Jesus sat, when He prayed. 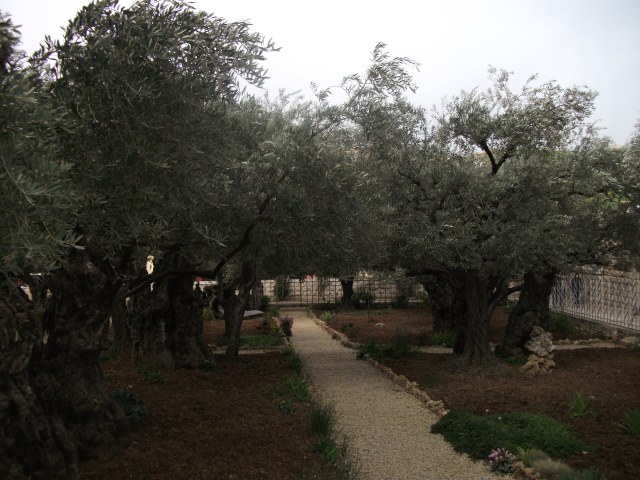 Again, it was another rainy day but that didn’t keep us from our mission!  We had to see EVERYTHING!

From King David’s Tomb, to the Mount of Olives, to the Garden Tomb….I’m running out of breath.  But one of the coolest places we visited was the Temple Mount.

This is located in one of the world’s most significant pieces of land.  It is the site of the Temples built by Solomon and Herod and is the most sacred site for the Jewish people.  It’s been said that it is the  place where “the Lord God formed man of the dust of the ground” (Genesis 2:7) and where Abraham bound Isaac for sacrifice.  It is also the same site that David bought from Araunah (Oman) the Jebusite, for fifty shekels of silver, to build an altar to the Lord.  His son Solomon took seven years to build a small but lavishly decorated Temple here.  This is where the Ark of the Covenant (containing the 10 commandments).  Then the Temple was destroyed by the Babylonians and built about 50 years later.  I could go on and on about who built and who destroyed… but when Caliph Omar went to Jerusalem in 638, he found the hilltop trashed out and desolate.  And since this was the spot that was considered to be Mohammed’s journey to heaven, he decided to build a mosque.

Today the Temple Mount (Dome of the Rock) has been built on the same spot where the Temple once stood.  It is sacred to the Jews, the Christians AND the Muslims….(can’t we all just get along?) It is beautiful and creepy, all at the same time.

But check this out….THAT is the Eastern Gate or the Golden Gate.  This is cool because the Bible indicates that Jesus passed through these gates frequently AND THIS is the gate that He will enter and reign FOREVER!

According to the Bible, the Messiah will come through the Golden Gate of the old city of Jerusalem and will bring about the resurrection of the dead in the cemetery on the mount.  It is to the Mount of Olives that Jesus will return in the last days…..

Ezekiel 44:1-3″ Then he brought me back the way of the gate of the outward sanctuary which looketh toward the east; and it was shut. Then said the Lord unto me; This gate shall be shut, it shall not be opened, and no man shall enter in by it; because the Lord, the God of Israel, hath entered in by it, therefore it shall be shut. It is for the prince; the prince!”

THE EASTERN GATE REMAINS SHUT AND IS AWAITING THE PRINCE OF PEACE!!! HALLELUJAH!

The LORD is going to return and open the gate.    Wow and double wow! 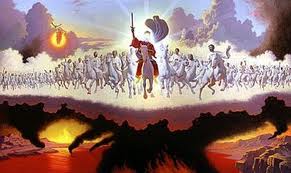